Our Sister School in the Dominican Republic

The Muskoka Montessori School is partnering with a new sister school in the Dominican Republic that the Simpson Family had the privilege of visiting this past winter. The school is located in the village of Cangrego just outside the city of Puerto Plata. Prior to this school being established there was no school available for the children of that village. The children are primarily of Haitian descent, and as such, are not recognized by the Dominican Government was Dominican citizens and therefore have no access to basic education, medical services, or basic utilities. The village of Cangrejo has limited access to clean water, electricity, plumbing and many of the comforts we take for granted here in Canada. It is very difficult for the Haitian people to get employment and so this village is very economically challenged. Many work in the local dump, sorting garbage and recycling ( mostly from resorts) to help support their families. The village is also prone to flooding when the rains come which makes living conditions very difficult and illness more prevalent.

Through an organization called HHART (Haitian Humanitarian Assistance and Relief Team), which is a Rotary led group, Jen Simpson has been visiting this village for the last 7 years. Last winter John, Rowan and Calum also spent a week down there prepping the new classroom. It was recognized that one of the key things that needed to be addressed if the people of Cangrejo were going to be able to improve their living conditions was to give them a basic education. A Montessori Style classroom was proposed as there was already a similar successful classroom in another village. It was decided to start with the Casa program and gradually build the school into the elementary classrooms as the children move through the program.

A lead teacher was found who already had 3 years of Montessori training and funds were raised to train 2 additional teachers assistants. Funds continue to be raised to ensure these teachers get continuing education as needed.

In February 2018 a group of 30 HHART members did a complete makeover of the villages community centre into a full fledged Casa classroom. It was thoroughly cleaned, freshly painted, and plumbing was installed for a small kitchen area and working toilet. The team also raised $8000 to provide the classroom with a deluxe Montessori material package with some shelving and tables and chairs. Two ceiling fans were also installed with proper lighting and the electrical was made safe. 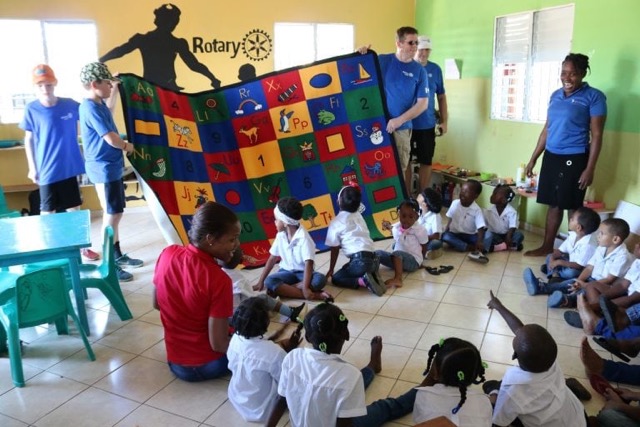 Currently there are 30 children attending the school. They have been provided with uniforms and fundraising will be ongoing to ensure all new students entering the program get a uniform. A feeding program was started which ensures each child gets one healthy meal a day while at school. The children mostly speak Spanish but some have also learned the Creole language that a lot of their Haitian parents speak. They learn Spanish, English, Creole, and some French in school.

Fundraising will need to be ongoing to help supply the school with materials, uniforms, continuing education for its teachers and to support the feeding program. HHART is very excited to partner with the Muskoka Montessori School and hopes a wonderful relationship between the 2 schools will grow and foster empathy and a broadened perspective of the world.

Before Domincan Republic: Our Sister School In Nicaragua

In October 2005 the Muskoka Montessori School held a special assembly in which Marta Bonelli and Keith Uhrig – individuals we know very well through the Buddhist community in Huntsville – came to speak about their experiences in community building in a small village in Nicaragua. As a way of supporting and promoting their work, the Muskoka Montessori School agreed to become a “sister school” with a small school in the community of Corozal. 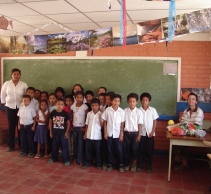 Our sister school has approximately 90 students and is located in a very rural and economically challenged area. The great majority of families involved with the school are subsistence farmers. In 1996 much of the village was wiped out by a mudslide, and the school and many of the homes were relocated. Soon after relocation, the water system failed, depriving the students of drinking water as well as the ability to wash after using the latrines. There had been no funds available to rectify this problem.

Recognizing the great difficulties faced by this community, we decided to begin a fundraising program for our friends in Corozal. Each year since then, we have hosted an art sale and barbeque in the spring and a bake sale in the fall, and this is what our funds have accomplished: